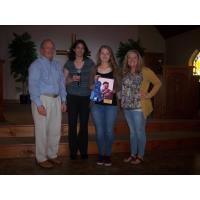 
The 2019 Student Art and Photo Quest concluded on Sunday, April 28, with many awards given for the most promising work. Maria Mai, an 11th grader from School of the Osage won the “Best of Show” award. The “President’s Award” went to Jessica Bradley, an 11th grader, also from School of the Osage. The Best of Division 3 winner was Michelle Mai, a 9th grader from School of the Osage. Michelle will receive a 3-year scholarship/mentorship award from the Lake Ozark Brush and Palette Club. All three winners are students of Danielle Greubel. Mary Meier, Visual Arts Chairperson of the Lake Arts Council, and her team of volunteers organized, set up, and ran the show. Tina Campbell, former president of Brush and Palette, and Bob Bair, Lake Arts Council president served as judges with Meier. Lake Arts volunteers and contributors provided the refreshments for the reception following the awards presentation.

The show was sponsored in part by the Missouri Arts Council, the Lake Arts Council, and Kohl’s Care charitable division of Kohl’s, Inc. Members of the Kohl’s Care team were instrumental in the set up of the show. The Kohl’s volunteer program fosters a culture of giving in all its locations and encourages associates to contribute their time and talent to local eligible nonprofit organizations. With every qualifying event, Kohl’s provides a financial award to the benefiting organization in support of these volunteer efforts.

The winners are listed below with their teachers’ names in parentheses: