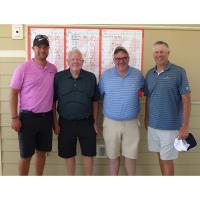 OSAGE BEACH, Mo. — The 41st Annual HK’s Hospital Benefit Golf Tournament, benefiting Lake Regional Health System, concluded June 9 at The Cove Golf Course. The tournament featured more than $100,000 in prizes, including CallawayGolf.com gift cards, awarded to the top four teams in each flight and sponsored by Central Bank of Lake of the Ozarks, and a $10,000 putting contest, sponsored by McGrath Insurance.

The Annual HK’s Hospital Benefit Golf Tournament — traditionally held the first weekend in June — was established by Harold Koplar, founder of The Lodge of Four Seasons. Throughout its history, it has earned in excess of $3 million for Lake Regional medical departments and the purchase of new medical equipment. This year, all proceeds benefit Lake Regional Cancer Services.

“Thanks to the community for supporting this important event again this year,” said Terri Hall, Lake Regional director of Fund Development. “Our success depends on the continued support of our generous sponsors, donors, golfers and volunteers.”