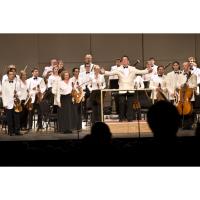 The Lake Arts Council and the Ozarks Amphitheater have combined efforts to host the Missouri Symphony Orchestra in a professional concert entitled “Strike Up the Band: Part 2” on Sunday evening, June 9th at 7:00. Gates will open for general audiences at 6:00. The title of the program comes from the Symphony’s “Hot Summer Nights” event series in Columbia. Musicians from around the nation and several countries will entertain the audience with a variety of “pops” compositions in symphonic arrangements. Broadway performer Melissa Bohon,,with Missouri award winning tenor Jazz Rucker  and New York night club and  concert performer Will Sevedge, will provide vocals.
Painters, string quartet musicians, and vocal groups will entertain audiences in the plaza area of the Amphitheater park as they enter and make their way to the seating area.
Tickets are available from the Bridal Cave box office, Ticketmaster on line (link provided at www.artsatthelake.com), at the Lake Arts Council office in the Stone Crest Mall, and from board members of the council. A limited number of VIP tickets are available for attendees wanting exclusive seating, special refreshments, and the opportunity to meet and talk with Conductor Kirk Trevor before the concert.
Founded in 1970 Hugo and Lucy Vianello, The Missouri Symphony is dedicated to enhancing and increasing the cultural awareness of classical music in the mid-Missouri region through high caliber performances by a fully professional orchestra and guest artists, and also encouraging and educating young musicians through the Missouri Symphony Conservatory, an educational program that nurtures the inner musician in each of its more than 120 instrumental and choral students.
Over the years, the Missouri Symphony has hosted, among others, Opera great Leontyne Price, world renowned pianist Andre Watts, popular singers Tony Bennett and Art Garfunkle, and well-known groups Asleep at the Wheel and the Texas Tenors.
Although started only as a chamber orchestra, the Missouri Symphony now consists of the Missouri Youth Chorus, Chamber Orchestra, Symphony Orchestra, Missouri Youth Concert Band, Missouri String Project, Missouri Symphony Society Performing Arts Center, Missouri Symphony Pops, Piano Student Showcase, Conductors Workshop, Columbia Schools Partner in Education, and the Missouri Symphony Conservatory.
This growing and evolving musical enterprise will share the finest orchestral music that Lake audiences can expect to hear this year.
The concert is sponsored in part by the Missouri Arts council, Farmers Insurance, and Community Foundation of the Lake.
For further information, contact the Ozarks Amphitheater or the Lake Arts Council at 573-964-6366.

Internationally known conductor, recording artist and teacher Kirk Trevor is a regular guest conductor in the world’s concert halls. Born and educated in En­gland, he studied conducting with the late Sir Adrian Boult and cello with Paul Tortelier. He came to the States in 1975 as a cellist on a Fulbright Grant and subsequently became Resident conductor of the Dallas Symphony Orchestra. He then went on to serve as Music Director of the Knoxville Symphony Orchestra for eighteen years until 2003 when he became Conductor Laureate. He was appoint­ed Music Director of the Missouri Symphony in 2001 and has led the orchestra in its Hot Summer Nights Festival.
In 2007 Trevor founded the Missouri Symphony Conservatory program, a new initiative to train, educate and inspire young musicians in a variety of activities through the Children’s Chorus, and three orchestras. Trevor is widely recognized as one of the leading conducting teachers in the world. His International Workshop for Conductors held in Europe is in its twenty-eighth year and draws more than fifty young conductors a year.

Since 2001 Trevor has been a regular fixture in the recording studios of the Slovak Radio Orchestra. He has served as Principal Guest conductor of the Slovak Radio Orchestra, leading them on national and international tours. He has recorded more than one hundred CD recordings of music ranging from the Baroque to the current day and from Clas­sical to Video Game scores including Diablo II. He has also recorded the music for the hit TV show Mozart in the Jungle.